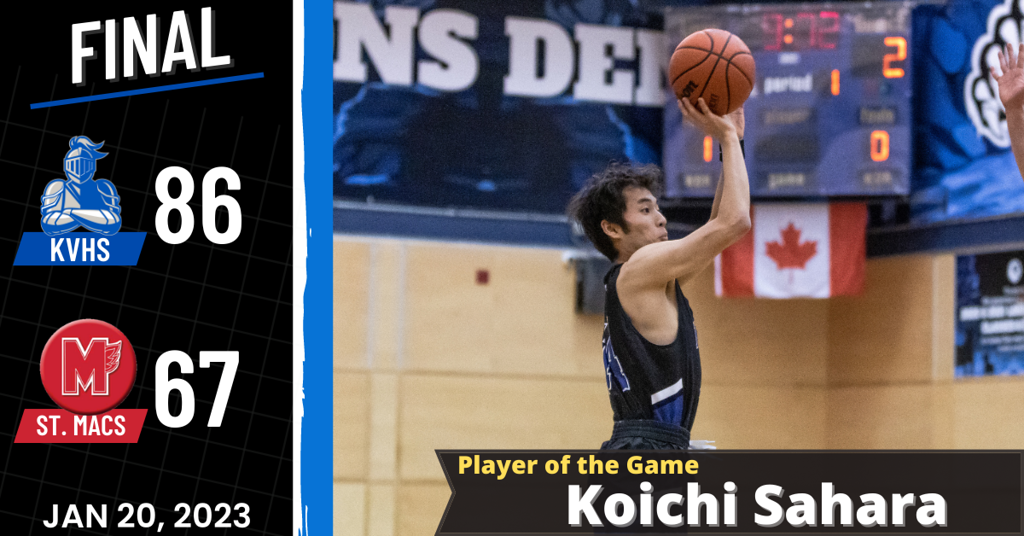 Playing the second of back-to-back games, and their third game of the week, the shorthanded KVHS Blue Knights were able to grind out an important 86-67 victory over St. Malachy’s. The win improves the Blue Knights to 10-1 in the Southern Conference and puts them one win away from securing first place and the right to host an extremely competitive south-west tournament February 9-10.

Perhaps it was tired legs, or the just the result of players missing due to injuries and illness, but KVHS was not able to effectively apply their full court pressure defense. Each time KVHS looked like they might pull away, St. Macs would solved the KV press to cut the Blue Knights lead back to single digits.

Fortunately the KVHS squad found the energy in the fourth quarter to buckle down into a trapping half court man-to-man defense to force some turnovers and a few easy scores to pull away late for the 19 point victory.

Leaders for St. Malachy’s were:

Koichi Sahara from Osaka, Japan, a grade 11 exchange student at KVHS, had his breakout game of the season. Koichi has been a starter the last month filling in for injured guards Jack Way and Adam Butler. Over that stretch he has shown that he is one of the best on-ball defenders in the province with tremendous court vision. On Friday however, Koichi showed his all-around game recording a season high in points (21) and rebounds (16) to go along with 12 steals for the team’s first triple double of the season.

The Blue Knights will now have much needed break as they head into the annual exam break. Following the layoff they travel to Moncton for a pair of games on Saturday January 28th, face St. Malachy’s in the rematch on January 31st for senior’s night, then finish up their season schedule with the Dairy Town Classic in Sussex February 2-4.