Crusaders Let One Slip Away 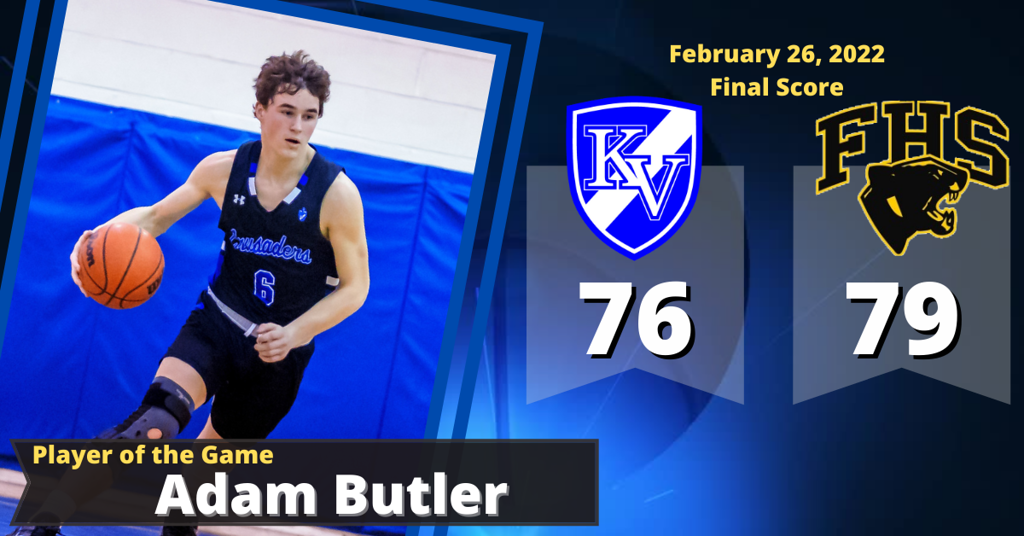 The last time the Fredericton High Black Kats hosted the KVHS Crusaders in a post season elimination game was 2015 when the Crusaders, with some late game heroics from Jack Tilley, erased a 4-point Fredericton lead in the waning minutes to earn a trip to the Final 12 at Harbour Station.

On Saturday it looked like the Crusaders might repeat that performance as they clawed back from an eight point deficit to take a five point advantage with under two minutes remaining but, unfortunately this time around, they were unable to hold on to that lead. Fredericton finished regulation with a 5-0 run to tie the game at 68-68 to force overtime.

In the extra frame the home town Black Kats were positioned to put the game away with under a minute to play. Sitting on a five point lead the Kats had a clear path to the basket but Cohen Fisher came up with a big blocked shot at the rim, collected the loose ball, then found a streaking Cole Defazio for a break away layup and the the foul.

Despite not converting the “and-1” free throw nor the put back off the offensive rebound, the Crusaders once again came through on the defensive end. This time it was Nick Hersey forcing the Fredericton turnover to give the Crusaders another possession with about 24 seconds remaining.

Sitting on a 3 point lead, the Black Kats decided to stay in their 2-3 zone that had frustrated the Crusaders for most of the second half. This time however, the Crusaders were able to get dribble penetration into the zone then kicked out to a wide open shooter. But as has been the case all day (KVHS was 2 for 22 from behind the arch) the shot was off the mark.

Forced into the playing the foul game, the Crusaders actually forced a jump ball then on the subsequent side out by Fredericton, Adam Butler forced yet another back court turnover by Fredericton with 6 seconds remaining.

On the following inbounds the Crusaders had a wide open corner 3-pointer that was just a little off to the right giving Fredericton the well earned three point victory 79-76.

Leaders for Fredericton were:

All season long Adam Butler has been the defensive leader for KVHS and arguably the best perimeter defender in the province. Adam’s performance in Saturday’s game only strengthen that claim as he set a KVHS single game school record with 15 steals while registering his first career triple double.