KVHS Runs Out of Magic 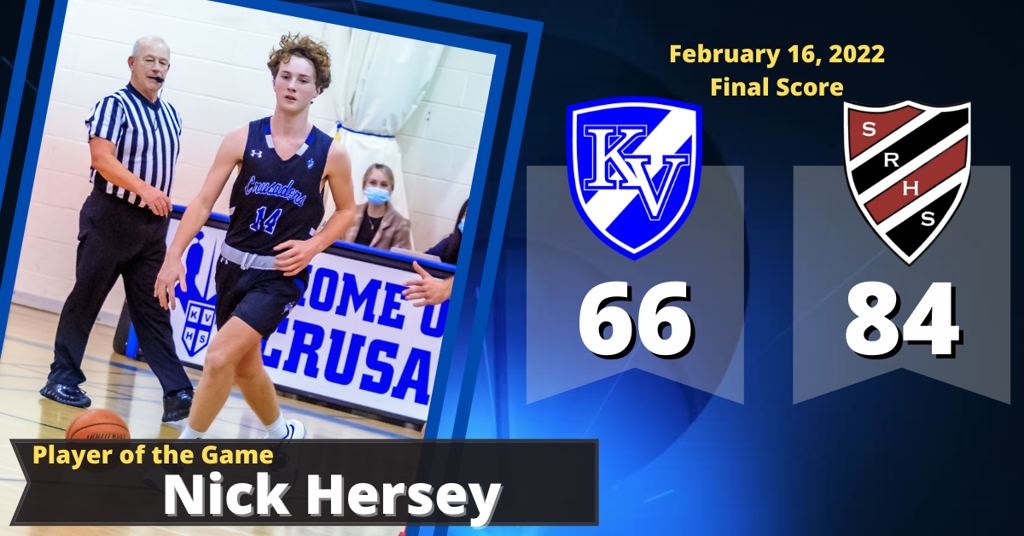 The KVHS boys basketball program has been hit hard with COVID this week with only three varsity and three junior varsity players not in isolation. But much like they did on Monday versus Simonds, the Crusaders adopted the “next man up” attitude and headed to Sussex with their makeshift roster.

The Crusaders started strong, jumping out to a early lead. Sussex, who were missing key players of their own due to health protocols, settled down after a quick timeout to pull cut the KVHS lead to 15-12 at the end of the first quarter.

In the 2nd quarter the Sonics started to tighten the defensive screws, disrupting the KVHS offensive and forcing the younger JV call-ups into live ball turnovers. When the dust settled on the first half, the home team had opened up a 39-29 lead.

In the 3rd frame KVHS found their offensive rhythm again to tie the game at 49-49 but Sussex closed the quarter with a quick 4-0 run for a 53-49 lead after 30 minutes. Unfortunately, playing with only six players, the visitors had nothing left in the tank to close out the Sonics.

Sonics pull away, scoring 31 points in the final quarter, for a 84-66 victory in front a loud home town crowd there to celebrate Seniors’ Night.

Leaders for Sussex were:

KVHS finishes the southern conference regular season at 3-2 (12-8 overall) good for third place. They are scheduled to face Sussex in the conference semi-finals.

Nick Hersey has been a swiss army knife for KVHS this season. He typically guards the other team’s best player, regardless of position, and at different point in the season has played every position. Wednesday night was no different as Nick filled in as the team point guard for the first time this year.