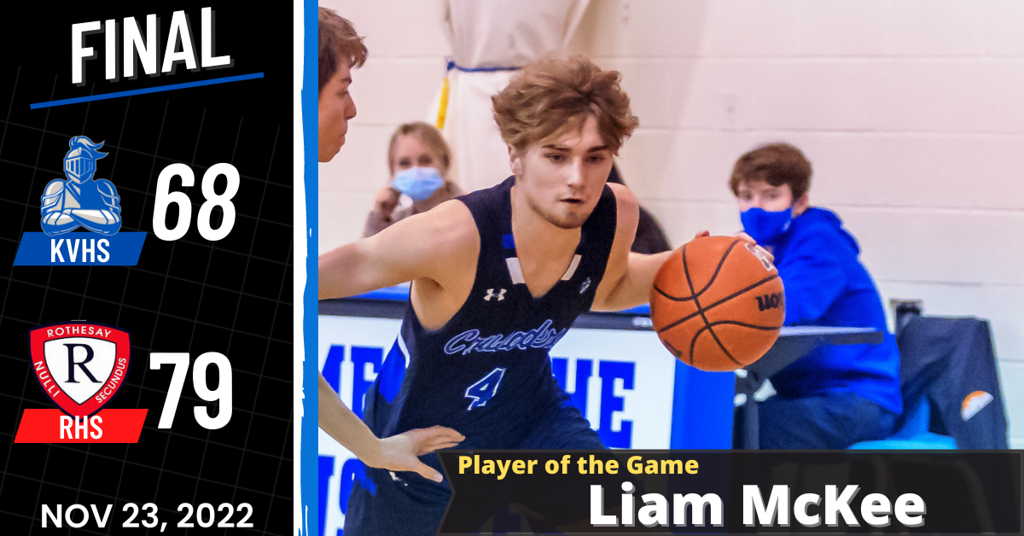 The anticipation for the return of the annual Rip Seely Challenge was at an all time high the last few weeks. Given the event was cancelled in 2020 and 2021 due to Covid 19 health restrictions, a large majority of the current players on both sides have not even attend the game since middle school.

Once again, the game didn’t disappoint!

For the first time in years, we had a packed gym at KVHS with loud fans supporting their team. It was standing room only for the boys game that started at 6:00 pm and just about everyone stayed right through to the end of the girls game four hours later.

The Rothesay High Redhawks entered the game as the favorites again this year. They have won the last three Rip Seely Challenges and are currently the #2 ranked AAA boys team in the province. The KVHS Blue Knights came into the game sitting at #3 in the rankings.

From the opening tip, Rothesay was the better offensive team. The Redhawks opened their season winning the Hartland tournament and have won their first two league games in convincing fashion. The Blue Knights, playing in just their second game of the season, looked like a team still trying to learn how to play together.

Rothesay jumped out to an early 9-2 led forcing KVHS to call a timeout just minutes into the game. The short break seemed to settle the home team, however, as they slowly chipped away at the lead to pull ahead 16-15. The teams then traded baskets to end the 1st quarter tied at 25-25.

The 2nd quarter was much like the end of the first with neither team able to pull away. KVHS struggled to score against the RHS half-court defense, but were able to force Rothesay into turnovers which led to some quick scores for KV. The visitors, however, were able to capitalize on KVHS mistakes in the final seconds of the half for a mini 5-0 run, including a banked 3-pointer by Titus Heron as time expired, to push their lead to 42-36 at the half.

The 3rd quarter belong to Rothesay. They played with more pace than KVHS and made timely jump shots which only energized the large Rothesay High crowd in attendance. On offense KVHS continued to struggle from the perimeter, unable to hit an open jumper despite getting good looks. The quarter ended with Rothesay leading 67-48 and it looked like the game was over.

With about 4 minutes to go in the 4th with Rothesay comfortably in the lead, KVHS found a little spark on offensive from grade 11’s Jack Way and Sam Goodfellow which suddenly changed the momentum in KV’s favor. The home team was able to follow up that mini offensive outburst with great defense, holding Rothesay to only 4 points over the final 3 minutes. Unfortunately for the Blue Knights, the Redhawk lead was too much to overcome as Rothesay comes away with the 79-68 victory and their 4th straight victory in the Rip Seely Challenge.

Leading scorers for KVHS were:

Leading scorers for RHS were:

The KVHS Blue Knights varsity girls team entered the 2022 Rip Seely Challenge as the top team in the province coming off a strong showing in the Saint Malachy’s tournament where they went undefeated. Rothesay girls, who have won the last two “Rip”, entered the game ranked #6 in AAA.

The first few minutes of the game looked like the young Rothesay squad was ready to pull off the upset and complete the Rothesay sweep as the jumped out to a quick 7-1 lead. Not rattled, KVHS turned up the defensive pressure and pounded the offensive glass to go on a 22-8 run run to end the quarter for the 23-15 lead after 10 minutes.

KVHS continued with the defensive pressure holding Rothesay to 10 points in the 2nd quarter, 9 in the 3rd, and only 7 in the 4th as they coasted to 88-41 victory.

Leading scorers for KVHS were:

Leading scorers for Rothesay were:

The KVHS varsity boys will be on the road this coming weekend as they head to Fredericton’s north side to participate in the Lion’s Den tournament hosted by Leo Hayes High School. They kick off with a 4:30 pm game against Carleton North at LHHS.

On Monday November 28, the Blue Knights resume league play when they host Simonds. The JV Boys play at 5:30 pm while the varsity teams square off at 7:15 pm. The varsity boys current sit at 1-0 in league play, 1-1 overall.