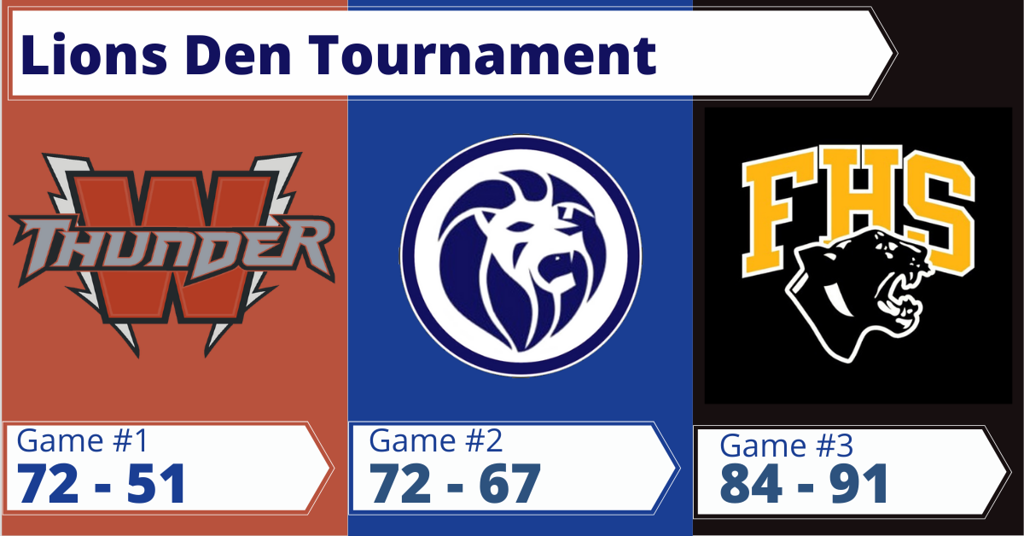 The KVHS varsity boys basketball team fell a few seconds short of the championship at the Leo Hayes Lions Den tournament this past weekend with a 91-84 loss to the Fredericton High Black Kats.

The Crusaders, unlike their first two games of the tournament jumped out to an early 14-7 lead to start the game, forcing the Black Kats to call a timeout to regroup. The Kats came out of the timeout a little better organized on defense which allowed them to get out in transition for some easy baskets, but KVHS was still able to push their led to 22-13 by the end of the first quarter.

The second half was a stalemate. After several lead changes and offensive runs by both teams, the Black Kats finished the third quarter with a one point lead at 68-67. The fourth quarter was much the same until the final 30 seconds.

With the Crusaders holding a one point lead of 84-83, the Blacks Kats fought off three straight offensive rebounds by the Crusader to force a baseline out of bounds to the Crusaders.

On the ensuing inbound Fredericton’s Owen Blacquier stole the inbound pass and converted a breakaway layup to give the Black Kats a one point lead at 85-84 with 26 seconds remaining. The Crusaders, deciding not to call a timeout, inbounded the ball after the made basket and unfortunately turned the ball over for the second straight possession, forcing them to play the foul game to end the game.

The Player of the Game for KVHS was Adam Butler with 9 points, 14 rebounds, 6 steals and 4 blocked shots.

How They Got There

KVHS opened the tournament with a 72-51 victory over the Woodstock Thunder, the top ranked AA team. Both teams got off to a slow start, struggling to score in the half court. The Crusaders won the first quarter 15-11 then the two teams tied the second quarter 16-16 putting KVHS in front 31-27 at half time.

The Crusaders came out of the half time break with a renewed focus on defense, holding the Thunder to just three points during the third quarter, and pushing their lead to 57-30. The KVHS benched finished the game with 11 of 12 players scoring at least two points.

The Player of the Game for KVHS was Cole DeFazio with 24 points, 10 rebounds, 6 steals and and 3 blocked shots.

In the semi-finals played on Saturday morning, the Crusaders faced the host team Leo Hayes Lions. Once again the boys from the Valley got off to a slow start, loosing the first quarter 21-12. The second quarter was the complete opposite with KVHS forcing turnovers which allowed them to score from their defense. KVHS took won the 2nd period 26-11 for a 38-32 lead into the locker room at half time.

The second half was a deadlock and a well played game by both teams. The Lions took advantage of their size, scoring easy baskets off post catches and offensive rebounds, while the Crusaders tried to use their quickness for steals and transition baskets. The Lions won the third quarter 14-13 while the two teams each scored 21 points in the fourth for the five points KVHS victory.

The Player of the Game for the KVHS was Liam McKee 11 points, 4 rebounds and 5 assists.