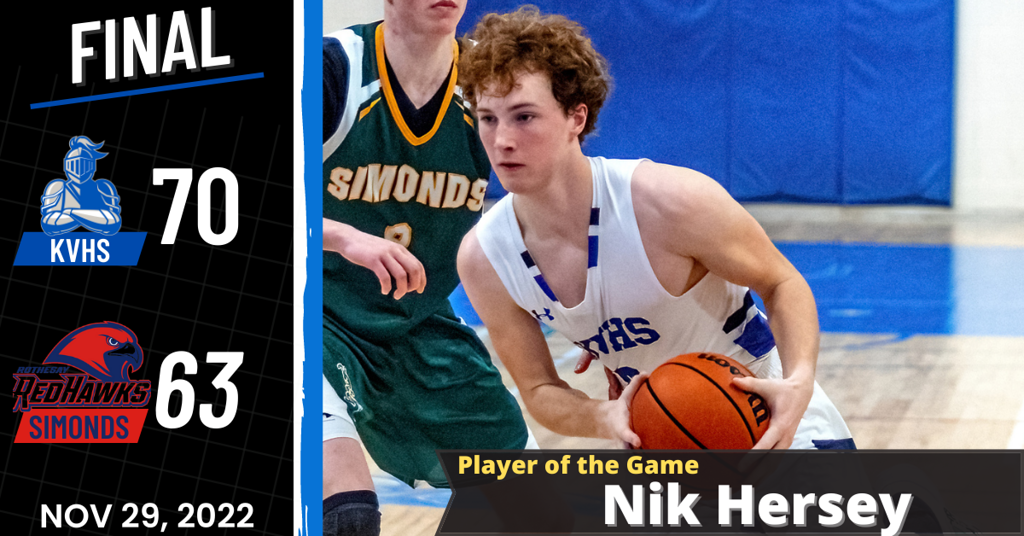 The “Battle of the Valley” is looking to be a special series this season. For the second time in less than a week, the KVHS Blue Knights and the Rothesay Redhawks battled for a full 40 minutes of exciting high school basketball.

The Redhawks were coming off winning their 4th straight Rip Seely Challenge which catapulted them to the #1 position in the AAA rankings. KVHS entered the game as the #4 ranked AAA and were playing their 5th game in four days.

As has been the pattern from the start of the season, the Blue Knights relied on their swarming defense to overcome a slow offensive start. The Redhawks had their own scoring struggles in the first quarter but their offensive rebounding kept them hanging with the visitors. The 1st quarter ended with KVHS leading 19-15.

The 2nd quarter was much the same with neither team able to make any type of run to open up the game. KVHS continued play good defense but Rothesay was able win the quarter 16-15 on the strength of their rebounding. KVHS led 34-31 at the half.

Last Wednesday in the Rip Seely Challenge, the Redhawks jumped on the Blue Knights early in the 3rd quarter to open a comfortable lead. KVHS didn’t allow that t happen this time however, but Rothesay was able to grind out a 5 point lead at 48-43 with about 4 minutes remaining in the quarter. That is when KVHS Sr. guard Liam McKee went on a personal 10-0 run to put his crew back into the lead. The teams ended the 3rd with KVHS leading 53-50.

The 4th quarter saw the teams trade the lead several times down the stretch. Rothesay jumped ahead 56-55 on a deep 3 pointer by River Lanz but Jack Way and Matt Ozkaynak answered right back to put KVHS back in front at 59-56. A minute later Colin Tilley drains another Rothesay 3-ball to tie the game at 59-59.

With Rothesay sitting in a 1-3-1 zone, Jack Way and Matt Ozkaynak once again were able to get open along the baseline for another pair of buckets and another 4-0 run to put KVHS ahead 63-59. Nik Hersey followed that with a run out to push the Blue Knight lead to 65-59.

Colin Tilley wasn’t ready to concede anything however as he pulled up for a deep transition 3-pointer to cut the KVHS lead in half at 65-62 with under 2 minutes to play. After a very poor offensive possession by KVHS, Rothesay looked like they had grabbed the momentum but a steal by Nik Hersey led to a transition layup by Jack Way and a dragger 3-pointer by Koichi Sarah completed a KVHS 5-1 run to end the game and the 70-63 win.

Leaders for Rothesay were:

The Blue Knights improve to 3-0 in league play and 5-2 overall.

Player of the Game

It’s rare a player can score just one basket and still have an impact on the game but that was what Nik Hersey did tonight. He played 35 minutes, had 2 points, 8 rebounds, 3 assists and 7 steals but it was his individual defense that was the difference maker for KVHS. His ability to stifle the Redhawks drive and kick offense allowed his teammates to challenge the Rothesay shooters who hurt the Blue Knights in the first meeting of the season.

KVHS travels to PEI this weekend for the Colonel Gray tournament. They face off against Bluefield High School at 4:00 pm on Friday then go against Sackville (NS) later that night. On Saturday they take on the host team, Colonel Gray to complete pool play.